Know, Where are these days and What is Sarvadaman Banerjee doing, The charming smile of the Serial 'Shri Krishna'?

There are many stars who have left a different mark on the screen by playing the role of Shri Krishna. Sarvadaman D Banerjee has been one such artist. Know, Where are these days and What is Sarvadaman Banerjee doing, The charming smile of the Serial 'Shri Krishna'?

The fans of Shri Krishna are present all over the world today. The craze about them is being seen a lot not only in India but also abroad. At the same time, Krishna devotees eagerly wait for Janmashtami throughout the year. Krishna's birthday is celebrated by his devotees with great pomp. At the same time, only a few days are left for Krishna Janmashtami to come and people have started preparations from now on.

There are many stars who have left a different mark on the screen by playing the role of Shri Krishna. Sarvadaman D Banerjee has been one such artist. He has made a special identity in every household by playing the role of Krishna in Ramanand Sagar's 'Shri Krishna'. Seeing him on the screen, it seemed as if this role was made only for Sarvadaman. At the same time, after years, now only one question arises in the minds of people after all, where is Shri Krishna i.e. Sarvadaman with a charming smile, and what is he doing today, so let's know where he is today and what he is doing...

Sarvadaman D Banerjee, who played the role of Krishna in 'Shri Krishna', has completely distanced himself from acting for the time being. Leaving showbiz, all the suppressors have settled in the valleys of the mountains. These days Sarvadaman is running a meditation center in Rishikesh, the city of Shiva.

In Rishikesh, Sarvadaman is enjoying meditation between the mountains and nature. Living in Rishikesh, Sarvadaman also runs an NGO. The name of this agency is 'Pankh'. Through 'Pankh', Sarvadaman takes care of the education and writing of about 200 children and provides work training to about 50 poor women of Uttarakhand to make them capable of leading a decent life.

Have also worked in these shows

Let us tell you that Sarvadaman Banerjee, born on March 14, 1965, in Magarwada, Unnao, Kanpur, never thought that he would one day be recognized as Krishna. After completing his schooling at Kanpur, Sarvadaman completed his graduation from Pune Film Institute. After that, he started trying his luck in acting.

Talking about his Workfront, Sarvadaman worked in 'Shri Krishna' apart from 'Arjun', 'Jai Ganga Maiya', and 'Om Namah Shivay'. For most of these too, he was seen as Vishnu or Krishna on the screen. Along with this, he worked in Hindi, Telugu, and Bengali films. 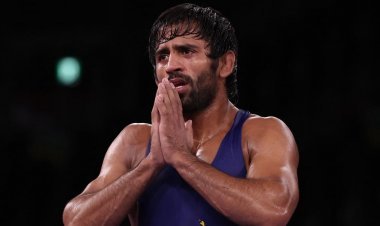 Punia said on the defeat in Sardarshahar – will learn a lesson from mistakes: Said...