Airplane wing kept in the truck collided with the bus

The airplane wing kept in the truck collided with the bus: Wing, the bus driver and many passengers were injured while taking the wing from Kerala to Hyderabad The airplane wing being transported in a truck from Kerala capital Thiruvananthapuram collided with a state transport bus. The accident happened in Balaramapuram on Wednesday. Several passengers including the bus driver were injured in this. All have been taken to the hospital. The national highway remained closed for several hours after the accident.
The front part of the bus was completely broken in this accident. In this trailer, the wings and other parts of an old Airbus A320 were being taken to Hyderabad. After retiring in 2018 after 30 years of flying, the plane was kept in the hangar unit of Thiruvananthapuram airport. For the last four years, engineering students were using this aircraft for the study of this aircraft.
When the aircraft was no longer useful for study, the authorities decided to sell it for scrap. Its bid was made, in which Joginder Singh, a resident of Hyderabad, bought the aircraft for Rs 75 lakh. This aircraft was being taken apart in several parts and kept in four trailers. The driver of the trailer fled after the accident. The police failed to remove the trailer, leading to a long traffic jam. The driver of the second trailer came and removed the trailer.

Priyanka's film Love Again first look out; Releasing on May 12

Only indigenous weapons will be included in the Republic...

Supreme Court disposed of around 1300 cases in last 4 days...

Drone fell on the track of Delhi Metro Magenta Line

States are taking more loans by breaking the scope of their... 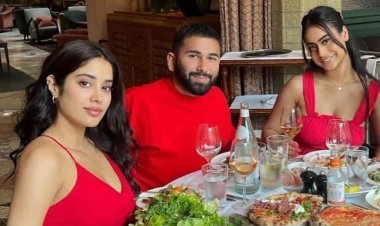