Nadda can take over the command of the BJP till 2024: The term ending in January 2023, the reason for the decision made in the upcoming assembly and Lok Sabha elections JP Nadda is likely to get an extension as BJP President. According to BJP sources, this extension will be till the 2024 Lok Sabha elections. His term is set to end on January 20, 2023. Nadda took charge of the BJP in 2020. The election of the President is held every 3 years in the party.
According to BJP sources, this decision has been taken keeping in view the assembly elections to be held in 10 states by next year and the 2014 Lok Sabha elections. Nadda became the working president of the party in July 2019. After this, on 20 January 2020, he was made the full-time chairman. His election was unanimous. Earlier, former president Amit Shah was also given an extension till the Lok Sabha elections in 2019.
According to the party's constitution, the process of electing a national president can be started if 50% of the organizational elections to state units are completed. The process of organizational election of the BJP was to start in August this year, but it has not started yet.
In such a situation, it is almost certain that Nadda will get an extension. However, according to the constitution of the BJP, there is also a rule to give two consecutive terms of three years each to the party president. Apart from this, Nadda also fits according to caste equations.
There will be no internal election process, sources said. This process should have started in August. But the party leaders have started preparing for the elections to be held in the states. Assembly elections are going to be held in two states of Gujarat, and Himachal Pradesh this year.
At the same time, assembly elections are to be held in 8 states next year. These include Karnataka, Tripura, Meghalaya, Mizoram, Madhya Pradesh, Rajasthan, Chhattisgarh and Telangana. Along with this, the party is busy in preparations for the Lok Sabha elections.
The BJP's performance was better during Nadda's tenure. Nadda was appointed full-time president of the party in January 2020. Assembly elections were held in Delhi and Bihar in the same year. In Delhi, BJP could not do wonders but in Bihar, it was definitely successful in forming the government with Nitish. However, only last month, Nitish Kumar left the BJP and formed the government with Lalu.
On the other hand, if we talk about 2021, this year elections were held in five states Assam, Kerala, Puducherry, Tamil Nadu and West Bengal. In this, the BJP could form the government in Assam and Puducherry. However, in West Bengal, it gave a strong fight to Mamata Banerjee and came into the role of the main opposition party, clearing the Congress and the Left parties.
Apart from this, the party did not gain much in Kerala and Tamil Nadu, but the vote percentage did increase. Apart from this, elections were held in 5 states including UP in 2022. Out of which the party once again registered a decisive victory in UP and formed the government again. Barring Punjab, the party also made a comeback in Goa, Uttarakhand and Manipur.
BJP President JP Nadda will hold a meeting with the new state in charge on Tuesday. This meeting has been called at 10 am at the party headquarters. Nadda will also meet with party general secretaries in the late evening. Perhaps this meeting has been called in view of the upcoming Gujarat and Himachal elections. Air India hostesses will not be seen in designer earrings: the size of bindi, number... Actor Vikram Gokhale's condition is critical: His daughter said- he has not passed... Murder of pump worker by slitting his throat: miscreants ran away by locking the... 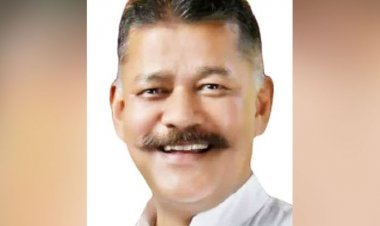 AAP Secretary Sandeep Bhardwaj commits suicide: The cause of death is not clear;... India should follow Australia-Canada to stop the arbitrariness of Facebook-Google:...