Temple occupied by Dalits in Karnataka: Dalit child was assaulted after entering the temple

Temple occupied by Dalits in Karnataka: A Dalit child was assaulted after entering the temple, and a fine of 60 thousand was also imposed Dalits occupied a temple in Karnataka and hoisted the blue flag there. In fact, on September 8, a Bhootayamma fair was organized in the Kolar district and Dalits were not allowed to enter the temple of the village deity. The 15-year-old son of Shoba and Ramesh, residents of the same village, went to the Chetan temple. The child touched a pillar attached to the village deity Sidirana.
Some villagers saw the child touching the part of the temple and told the elders. He alleged that the boy ignored the rules of the village. Enraged by this, the villagers beat up the Dalit child. After that, the child's family was called the next day to appear before the village elders.
On Thursday, other Dalits, enraged by this behaviour with the Dalit family, gheraoed the village. Also, expressing displeasure, put blue flags in the temple and occupied it.
The villagers alleged that the pillar became unclean by touching it and would have to be repainted. Narayanaswamy, the village head, imposed a fine of Rs 60,000 on him for re-painting. He also warned that if they do not pay the fine by October 1, the entire family will be thrown out of the village.
The Dalit family had also filed a police complaint against it. Police had arrested 8 people. According to the police, only 8-10 Dalit families live in the village. 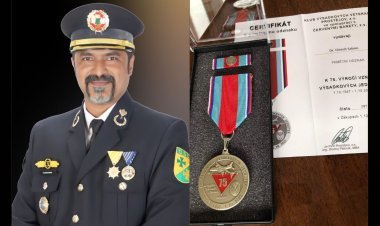