On August 15, Lashkar-Jaish is planning a terrorist attack The Intelligence Bureau (IB) has issued an alert in view of 15 August. A 10-page report has been submitted to the Delhi Police, in which there is a possibility of a terrorist attack on the day of Independence Day.
The IB said in its report that terrorist organizations like Jaish-e-Mohammed and Lashkar-e-Taiba are conspiring to carry out an attack. Pakistan's intelligence agency ISIS has instructed the leaders of both terrorist organizations to attack.
The IB says that terrorists can use UAVs ie unmanned aerial vehicles and paragliders to attack on August 15. Therefore BSF has been asked to remain alert.
The report has asked to keep a strict vigil on those places in Delhi where the maximum number of Rohingyas live. Apart from this, Delhi Police has been instructed to keep an eye on radical groups.
The IB in its report has mentioned the recent assassination of former Japan PM Shinzo Abe and the incidents in Udaipur, Amaravati. Delhi Police has been asked to remain alert in crowded places. Instructions have also been given to keep tight security around the Red Fort. It has been said to be more strict on the entry of common people into the Red Fort.
This year the country is celebrating the Amrit Mahotsav of Independence. The central government has started the 'Har Ghar Tiranga Abhiyan' as a 15-day program. Prime Minister Narendra Modi will address the countrymen from the Red Fort on August 15. In such a situation, this year's Independence Day is going to be special.
Delhi Commissioner Sanjay Arora has taken stock of different places in the capital on August 15. Visited the Red Fort and inspected it. About 7000 thousand Delhi Police and Paramilitary personnel will be deployed here. Along with this 1000, CCTV cameras will be monitored every step of the way. 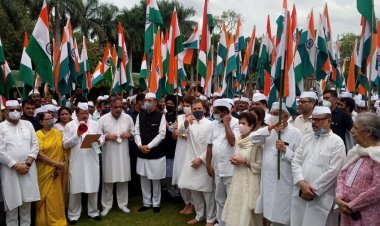 Rahul Ranjan, a resident of Jaipur, was honored by Bollywood actress Malaika Arora....